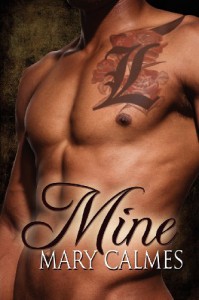 Hmmm, I am not quite sure how to properly write down my opinion of this book. First of all, this is my second Mary Calmes, and I liked the first one, Frog, immensely. Mine is about a very special kind of gay relationship, featuring BDSM elements, and the story of two men who are strongly dependent on each other, up to the point of obsessiveness. Actually, I did quite enjoy the relationship part of the story, showing how Trevan, the top, deals with Landry's rather overwhelming fixation on him. I wouldn't say it's a healthy relationship, but in its own way, it makes sense. What I found excessively boring was the "plot" part about Trevan's job as a runner and its potential danger. Frankly, I skipped those scenes, as the whole betting and gaming scene is, to my eyes at least, very dull.