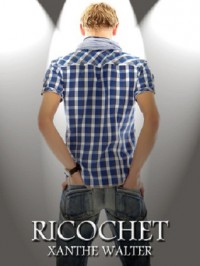 Oh my, this book turned out beyond great, and I am so glad I gave it a try, despite it being set in a different universe. Initially, I thought Ricochet would be a nice bit of fluff, seeing as it is set in a so-called BDSM universe where everything is nearly the same as we know it, with the exception that all people are either born as doms or subs. However, the novel turned out to be so much more, a story that is not only well plotted but also has an equal intensive focus on the D/s dynamics of the two heroes.

Lately, I have come upon a lot of novels that have too much plot and too little focus on the D/s aspects. Frankly, when I buy these genre books I do expect both, and I am over the top happy when I get a story that is not only solidly and uniquely plotted but also explores the relationship part and how the characters grow through the sex they experience together.

Ricochet is not overly kinky, but there are extensive scenes where we get to know the top- and subspace of both characters and how they fall for each other. I found out this author has written about a million fanfic pieces, but no other books featuring the other characters in this book. Merde! I want more! Ricochet is a feel good novel without it being sappy, a book that takes me on a rollercoaster ride and makes me fall in love with the romance genre all over again. A

PS: Besides the great story, it also needs to be mentioned that Ricochet has some hilarious parts in it, making fun of "our" brand of universe as something unimaginable, and not to forget, there also are some well-known series such as "Subs and the City" ROFL.